When we first received an email from Lindsey from Lindsey D. Taylor we thought she was a photographer. Boy were we wrong. Lindsey is an artist and all the photos in this post are drawn. D-R-A-W-N. We won’t spoil it for you, so you’ve gotta take a look!

WHAT DO YOU MAKE/SELL? TELL US ABOUT YO’ SELF.

I would call myself an illustrator, but I know that can be quite vague. Specifically, I am a hyperrealist portrait-drawer who also loves to draw both semi-realistic and surrealistic fantasy “mini-murals”. I love to marry my passions of people, justice, hip-hop and food into my art; creating a fun, broad range of work!

My most recent project was a series titled “Rhinoceros Women”. This was a series of ten drawn portraits of women whom I admire for their character- something not often recognized or highlighted in women these days. I wanted to draw attention away from the physical that culture tends to love to focus on in women, and remind us of the more important aspects of.. humanhood. Such as… a woman can be known and appreciated for something greater than her meticulously groomed eyebrows or perfect body shape.

HOW LONG HAVE YOU HAD YOUR BUSINESS?

One year this July!

HOW DID YOU GET STARTED?

I was entirely unhappy with the school I was at for Graphic Design, when a good friend of mine suggested I get back into drawing, to see if it’s something I might want to pursue instead. I had settled upon graphic work as opposed to fine art, because I felt it would be harder getting work in the fine arts field. But I started drawing, and I felt my soul come alive again! I realized I had missed it incredibly, but also, in the time of not drawing for 4+ years, had somehow improved greatly. So I got gutsy, left the school, and ever since have been pursuing fine arts. 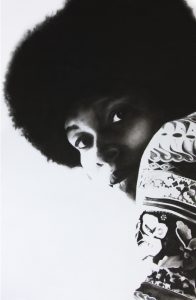 WHO OR WHAT INSPIRES YOUR WORK?

I’m most inspired by extreme opposites – Banksy, and Kit King. Banksy, well, most know of Banksy (or should!), his work is so visually simply but so clever and political and I can never get enough. King is an incredible hyperrealism oil painter, and her success as a Canadian woman doing her thang has always inspired me.

Also, strangely, I’m also very much inspired by Alice in Wonderland! Though I had never seen it before, I always had Alice in Wonderland inspired dreams throughout my childhood. I finally just watched it a few months ago (the Tim Burton version) and absolutely love it’s weirdness; you’ll probably see that kind of surrealism in my mural work.

WHAT DO YOU DREAM FOR YOUR BUSINESS IN THE FUTURE?

I hope I can create a platform of transparent story-telling. I hope that I can inspire people (both women AND men) to live beyond the expectations of society and start leading our own way; influencing instead of being so influenced. I’m always telling people that I don’t just want to make pretty pictures, I want my work to be an emotional, impactful experience. And… I would loove to have my own studio one day.

WHAT’S YOUR FAVOURITE SOCIAL MEDIA PLATFORM AND WHY?

Instagram! Very simply because it’s image-based. I’ve come to despise the amount of spam I have to filter through, but IG has still held up as my favourite platform.

HOW DO YOU PICK YOURSELF UP WHEN THINGS GO WRONG?

Friends, God, shawarma, and baking. I have a few really wonderful people in my life who regularly help me collect myself and stick it together. I also find so much peace when I pray; I honestly rely heavily on my relationship with God to push through the tough stuff. And baking, man. I love to bake, and have recently developed an obsession for fancy cake-making, so fun things have been in the works.

WHAT’S ONE THING NO ONE KNOWS ABOUT YOU? GIVE US AN INTERESTING FACT!

I couldn’t decide if the first was interesting enough for ya’ll (haha!) so I’ve included a second. First: I hate being chased!! There are very few people who know that.. but I literally cannot stand it. I will just plop down on the ground, haha!

Second: I box! It’s not a secret but not many people know. When someone finds out they go, “Box? Like.. the sport??” I think it surprises people because of my small frame and lack of aggression. But I fell in love with the sport as part of a healing process, and since it has been my go-to.

IF YOU COULD HAVE ANY SUPER POWER WHAT WOULD IT BE?

All my flowers and plants would thrive and never die, and I could drink all the Chick-fil-a vanilla milkshakes in the world without any negative effect!!

WHAT ARE YOUR SOCIAL MEDIA HANDLES?

WHERE CAN WE FIND YOUR STUFF?

I sell prints of all my work on Society6 , which are all gallery quality fine art prints using GicléeIt will be the last show with the full current series, with all ten originals present. You can find me on my  website too: www.lindseydi.com!